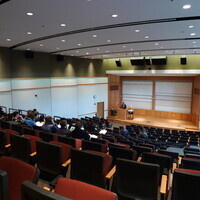 The large lecture hall on the Science Center’s first floor has gone by the name West Lecture Hall—because it’s on the west side of the building—ever since the center was completed in 2002. On October 29, 2013, the room received an official name—the Nancy Schrom Dye Lecture Hall—in honor of Oberlin’s 13th president, during whose administration the building was conceived and constructed and who was an avid supporter of the effort. The renaming of the lecture hall was made possible by an anonymous gift that also will support access and equity at Oberlin.

Examining the Buttermilk: A Biomythology of...

A fascinating roundup of all the major issues facing journalism today, delivered entertainingly. Oberlin is lucky to be in touch with this distiinguished alumnus.