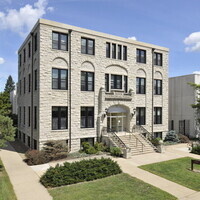 Constructed in the years 1909 and 1910 at a cost of $110,000, the building was named in commemoration of the life services of Professor Fenleon B. Rice and Mrs. Helen M. Rice.

Professor Rice was for 31 years the director of the Oberlin Conservatory of Music, and the work of Professor and Mrs. Rice is due in large measure to the early development, the rapid growth, and the high artistic ideals of the conservatory.

Rice Memorial Hall is a four-story structure containing six large lecture rooms, numerous studios, and over 100 practice rooms. It was used exclusively for the work of the conservatory.

The architect of the building was Mr. A.B. Jennings of New York, and it was erected by George Feick of Sandusky.

The construction project of King Memorial Hall included the renovation of Rice and the removal of its top floor.