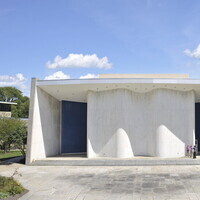 Large-scale theater productions, dance performances, and two operas annually are staged in the 501-seat Hall Auditorium. Its distinctive, wave-like façade was the subject of much controversy before and after its completion in 1953. The theater is named for Sophronia H. Brooks Hall, mother of Charles Martin Hall, an Oberlin alumnus, benefactor, and inventor who founded ALCOA.

It is one of three buildings that comprise the Eric Baker Nord Performing Arts Complex.