Writing Lives: A Conversation and Reading With Peter Stephan Jungk 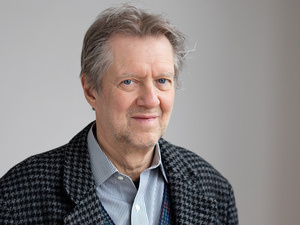 The Department of German Language and Literatures presents a free public reading in English by Peter Stephan Jungk, Oberlin's 51st Max Kade German Writer-in-Residence. Jungk will read from his biographical and autobiographical writings. Gabriel Cooper, Assistant Professor of German, will moderate a conversation with Jungk to accompany the readings. An open Q&A with the author will conclude the event.

Peter Stephan Jungk was born in 1952 in California, and raised in several European cities. Since 1988, Jungk has worked in Paris as a novelist, screenwriter, filmmaker, and translator. A former fellow of the American Film Institute, he has directed 5 documentary films and written 12 books, including the acclaimed biography Franz Werfel: A Life from Prague to Hollywood (1990) and the novels The Snowflake Constant (2002) and The Perfect American (2004), a fictional biography of Walt Disney. The award-winning film Tracking Edith (2016) is based on Jungk’s biography of his great aunt, a photographer and Soviet spy (Die Dunkelkammern der Edith Tudor-Hart [2015]). In 2021, he published a memoir, Marktgeflüster, about finding home at an open-air market in Paris, and Warum ich beschloß, Peter Pakesch zu mögen, a biography of influential Austrian gallerist Peter Pakesch.