WORDLESS! An Evening with Art Spiegelman and Phillip Johnston 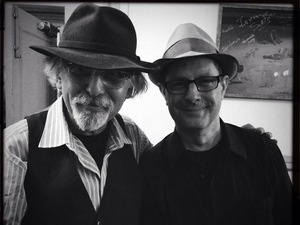 Art Spiegelman began drawing professionally at age 16 and, as part of the underground comix subculture of the 60s and 70s, created Wacky Packages and Garbage Pail Kids. Along with his wife Françoise Mouly, he founded RAW, the acclaimed avant-garde comics magazine that first serialized his Holocaust narrative Maus, for which he won the Pulitzer Prize in 1992. Spiegelman worked at The New Yorker as staff artist and writer for a decade. In 2011, he won the Grand Prix at the Angoulême International Comics Festival, marking only the third time an American has received the honor.

A saxophonist and composer of jazz and new music, Phillip Johnston has been a significant figure in the underground music scene of New York’s downtown since the beginning of the 1980s. He co-led The Microscopic Septet during the 80s, and in the 1990s he led Big Trouble and The Transparent Quartet. He currently performs in Australia with Phillip Johnston and the Coolerators  among others. When not touring or performing live, Johnston has composed extensively for film including Paul Mazursky’s Faithful and has also composed for many live theater productions.

The convocation is free and open to the public. No tickets are required. For more information please contact the Office of Public Programs at (440) 775-6785 or visit www.oberlin.edu/artsguide/convocation-series