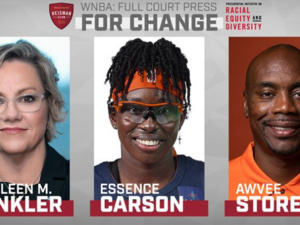 The Heisman Club of Oberlin College and the Presidential Initiative on Racial Equity and Diversity present “WNBA: A Full Court Press for Social Change” on Wednesday, February 17, at 7 p.m. EST.

Over the past year, no sports entity was more active in the social justice movement than the WNBA and its members. In the summer of 2020, the league announced the Justice Movement campaign and the formation of the social justice council to be a driving force of continuing conversations about race, voting rights, LGBTQ+ advocacy, and gun control, amongst other important societal issues.

Throughout the season, players, executives, and coaches from all 12 of the league's teams were actively creating change through the Black Lives Matter and #SayHerName initiatives in the wake of the deaths of George Floyd, Breonna Taylor and many others. The league also spearheaded a widespread voting campaign to educate people on how to vote and the importance of making their voices heard.

Oberlin College also has spent much of the past year recommitting itself to being a leader in this space and is proud to partner with the WNBA to lean in and learn during this special event.

"The women of the WNBA using their platform to bring attention to the societal inequalities that exist is inspiring. Oberlin sharing an evening during Black History Month with the WNBA is a natural match with the current Presidential Initiative on Racial Equity and Diversity and our rich history of advocacy," said Associate Vice President for Athletics Advancement and Delta Lodge Director of Athletics & Physical Education Natalie Winkelfoos.

To Learn more about the panel, please view their bios below.

Kathleen Kunkler is currently a Senior Vice President for Morgan Stanley and was named a Global Sports and Entertainment Director in 2014. Kathleen's focus over her 34-year career has been helping her clients define and achieve their financial goals and dreams. Using her passion for sports and finance, she’s built a business that includes some of the top women in the sports industry, including coaches, athletic directors, conference commissioners, sports media and professional athletes.

She has also been a leader in the nonprofit world, helping grow WIN for KC, the Women's Intersport Network of Kansas City, one of the largest organizations in the country that advocates for girls in athletics. She served as a board member for many years, including board president from 2006–2008, and she continues to support WIN's mission of promoting the lifetime value of sports, fitness and leadership for women.

An athlete who played basketball and softball at William Woods University, Kathleen is on the Board of Trustees for her alma mater and was recently named as a distinguished alumni.

Kathleen lives in Prairie Village, Kansas, and enjoys playing golf and singing in her band.

Carson is a 13-year WNBA veteran who has seen time with New York, Los Angeles, Phoenix, Washington and Connecticut. The Rutgers University graduate was selected 7th overall by the NY Liberty in the 2008 WNBA Draft. Four years later, in 2011, Carson was named a WNBA All-Star. In 2016, the same year she signed with the Sparks, she helped guide her team to a WNBA Championship. A year later she appeared in the finals again but was unable to secure back-to-back championships.

During the WNBA's condensed season in 2020, Carson and the Connecticut Sun reached game five of the WNBA semifinals. The seventh-seeded Sun defeated the No. 6 Chicago Sky and No. 3 LA Sparks in the first two rounds of the WNBA playoffs en route to the semifinals. Carson is also a classically trained pianist. She began studying piano at age nine and went on to pick up the saxophone.

Storey serves as the team’s full time Director of Basketball Player Development. Storey joined the Sun in 2019, assisting with player development and scouting. In addition to his previous duties, he also focuses on building out robust resources for players, both on and off the court.