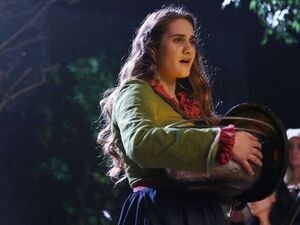 Join us in the ’Sco for a screening of the made-for-TV-and-online opera Vireo: The Spiritual Biography of a Witch's Accuser, followed by a Q&A with composer Lisa Bielawa.

The eponymous heroine Vireo, played by soprano Rowen Sabala, is a 14-year-old girl genius entangled in the historic obsession with female visionaries, as witch-hunters, early psychiatrists, and modern artists have defined them. Based on Bielawa’s research at Yale, then freely adapted and re-imagined by librettist Ehn, Vireo is a composite history of the way in which teenage-girl visionaries’ writings and rantings have been manipulated, incorporated and interpreted by the communities of men surrounding them throughout history.

From the European Dark Ages to Salem, Massachusetts, to 19th century France and contemporary performance art, Vireo provides a thoughtful, sometimes-humorous look at the universal issues of gender identity, perception, and reality.

Additionally, the opera features the talents of notable groups from around the country including Kronos Quartet, the San Francisco Girls Chorus, Magik*Magik Orchestra, American Contemporary Music Ensemble, Alarm Will Sound, PARTCH, the Orange County School of the Arts Middle School Choir, and others.