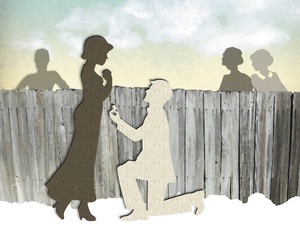 In The Wedding Band it is the summer of 1918, there is a war in Europe, and a smaller war in South Carolina. Julie is an African American seamstress. Herman is a white man that has kept company with her for years. As their growing attraction accelerates into an affair, they must of course, deal with the prejudices and wrath of ignorance in early 20th century America.