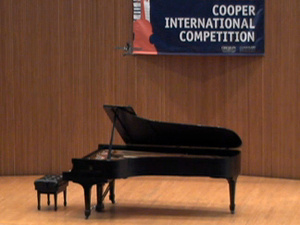 These remarkable young artists begin with recital repertoire and advance through Semifinal rounds to the Concerto Round, where the field narrows to 10 pianists. Six accomplished musicians perform in the Recital Finals on Wednesday evening, also broadcast live on WCLV-104.9 FM. At the end of that performance, the jury determines the three pianists who will move on to the Concerto Finals with The Cleveland Orchestra at Severance Hall. On Friday, July 20 at 7:30 pm, that evening's performances feature complete concertos and one finalist will emerge as the 2018 Cooper champion—with a grand prize of $20,000.

All Oberlin performances are free and take place in Warner Concert Hall (77 W. College St.) on the beautiful campus of Oberlin College and Conservatory.

The fourth, fifth, and sixth prizes of $1,500 each and the Audience Prize of $500 will be presented at the conclusion of the Recital Final Round.

The top three finalists will advance and compete on Friday, July 20, for first, second, and third prizes in performances of complete concerti with The Cleveland Orchestra in Severance Hall in Cleveland, Ohio. The first prize of $20,000, the second prize of $10,000, and third prize of $5,000 will be awarded that evening. These top three competitors are also awarded full four-year scholarships to Oberlin Conservatory, pending admission.

Severance Hall tickets: Call 1-800-686-1141 or click here for tickets to the Concerto Finals July 20 at Severance Hall. Tickets start at $13. All students under age 18 are admitted free with a paying adult.