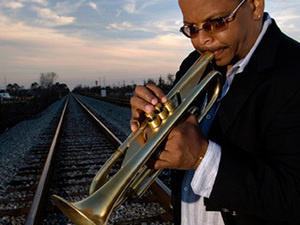 The concert will open with a three-piece set by The Ben Cruz Quintet, a small jazz ensemble from Oberlin's Conservatory of Music Jazz Department.

This performance is FREE.

The concert will NOT be live streamed.

ABOUT THE WORK
Film director Spike Lee commissioned New Orleans native Terence Blanchard to compose the score for his 2006, four-hour, award-winning HBO documentary When the Levees Broke: A Requiem in Four Acts, which showed the agony of the aftermath of Hurricane Katrina. In 2007, Blanchard, with that project as his starting point, recorded A Tale of God's Will (A Requiem for Katrina), parts of which were heard in Lee's documentary. The album was deeply personal. Blanchard’s mother, Wilhelmina, lost her Pontchartrain Park home in the tragedy.

In 2008, the album won a Grammy for Best Large Jazz Ensemble Album, and the song “Levees” was nominated for Best Jazz Instrumental Solo.

ABOUT THE GUEST ARTIST
A world renowned trumpeter/composer/band leader and Blue Note recording artist, Terence Blanchard is the most prolific jazz musician to ever compose for motion pictures. Blanchard was born and raised in New Orleans where he studied with the Marsalis brothers at the famed New Orleans Center for the Creative Arts. In 1980, he won a scholarship to Rutgers University and immediately began performing in the Lionel Hampton Orchestra. Two years later, he succeeded Wynton Marsalis in the legendary Jazz Messengers before forming his own influential groups. Blanchard originally began performing on Spike Lee's soundtracks, including "Mo Better Blues" in which he ghosted the trumpet for Denzel Washington. Blanchard lives in New Orleans with his wife, Robin, and his four children.

The 2007 recording of A Tale of God’s Will: Requiem for Katrina can be heard here.

- IMDb Mini Biography By: A. Magro