"The Silence of Others" - Documentary Screening with Director Almudena Carracedo 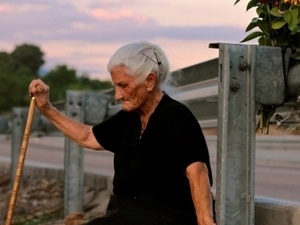 Filmed over six years, The Silence of Others reveals the epic struggle of victims of Spain’s 40-year dictatorship under General Franco as they organize a groundbreaking international lawsuit and fight a “pact of forgetting” around the crimes they suffered.

The Silence of Others has been seen by more than 1.2 million people in Spain, where national broadcaster TVE called it “the film that everyone is talking about.” It has screened at festivals or cinemas in more than 45 countries. It premiered in U.S. theaters in May 2019 and will be shown on PBS’ POV series.

The Silence of Others is the second documentary feature from Emmy-winning filmmakers Almudena Carracedo & Robert Bahar (Made  in  L.A.) and is executive-produced by Pedro  Almodóvar.

Director and cinematographer Almudena Carracedo will be on campus to present the film and engage in an audience discussion following the screening.

Silence of Others features old white haired woman sitting on a bench holding a wooden cane.