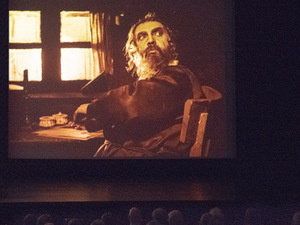 The Ring Family Jewish Film Festival continues this spring with three silent films during the first three weeks of April.

This silent film from 1923 (a precursor to The Jazz Singer) by German Jewish director E. A. Dupont tells the story of a rabbi’s son who leaves the shtetl and joins the Burgtheater in Vienna.

With his historically authentic set design and an ensemble of prominent actors, the film is an outstanding example of the creativity of Jewish filmmakers in 1920s Germany.

The film will be accompanied by pianist Donald Sosin and acclaimed Klezmer violinist Alicia Svigals, playing their newly commissioned score for the film.

Refreshments and snacks will be available starting at 7:30 pm; film screening begins at 8 pm. Free.

Sponsored by Oberlin Hillel and funded by the Ring Family Fund.

FREE, open to the public.