The Internment Experience: Discovering its Impact on People’s Lives 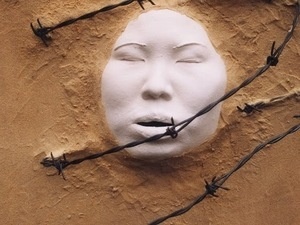 Elaine Yoneoka ‘76 will present her creative installations, mixed media work, and performance that grapple with the impact and legacies of Japanese American internment during World War II. Through them she will share her observations working with former internees and their families. Both of Yoneoka's parents were incarcerated at Tule Lake during the war.

An Oberlin graduate with Honors in Psychobiology, Yoneoka has shown her work of mixed media, digital media and installations across the United States. and has done artistic residencies at Massachusetts Institute of Technology, Do While Studios in Boston, and the Urban Gateways Arts in Education program in Chicago. Her work has been funded by grants from the National Endowment for the Arts and the California Civil Liberties Public Education Program.

This talk is part of the monthlong series of events organized in conjunction with the public history exhibit, Courage and Compassion: Our Shared Story of the Japanese American World War II Experience in the Richard D. Baron ’64 Art Gallery.