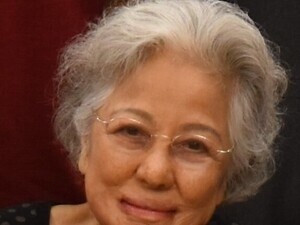 Shigeko Sasamori was 14 years old in 1945 when the bomb exploded on August 6 in Hiroshima. Although she was 2 miles away from the hypocenter and sustained extensive burns, she survived.

In 1955, Norman Cousins, an American journalist, raised funds to bring 25 women from Hiroshima to the United States for reconstructive surgery. Sasamori was one of them. She later was adopted by the Cousins family and decided to move to the United States. This is her personal account of what happened on that day and her life thereafter.

Sasamori and Professor Kazumi Hatasa of Purdue University will jointly tell her story in the aftermath of the bombing, recovery period in Hiroshima, and then her move to and life in America.

This is a truly rare and once in a lifetime opportunity to hear directly from the survivor of the atomic bomb. The average age of the hibakusha 被爆者 (bomb survivors) is 82. Sasamori is 87, and she is still healthy and wants to share her life and hope for peace with young people. This event is free and open to public.