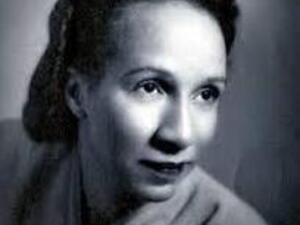 Shirley Graham Du Bois ’34 was an Oberlin alumna, composer, playwright, biographer, nation builder, and activist. She was one of the first black women to stage an opera in the United States and one of the earliest black women musicologists.

Graham Du Bois arrived on Oberlin’s campus in 1931. While a student at Oberlin, she composed and directed TomTom, the first opera written and staged by an African American woman. The debut of TomTom drew an audience of over 25,000. She went on to author seven plays, 10 biographies, two novels, and served as the founding director of Ghana Broadcasting Corporation.

Join us in this two-day symposium as we unveil a plaque in her honor, discuss her many talents, and explore the making of this opera.

Program will include keynote address and a student performance.

Sponsors include the Gertrude B. Lemle Teaching Center, StudiOC, a grant from the Andrew W. Mellon Foundation, Dean of the College of Arts and Sciences, Dean of the Conservatory, the Departments of Africana Studies, History, and Theater, and Oberlin College Libraries.