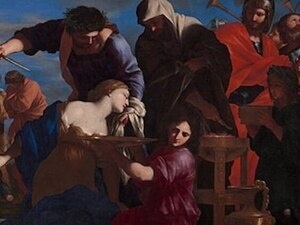 Join the Classics Department in the Annual Bardic Reading. This year we will be reading Troades (The Trojan Women)—a Roman tragedy with a Greek Subject written by Lucius Annaeus Seneca. Troades is one of Seneca’s best known and most highly regarded plays, and it was a strong influence on Elizabethan English playwrights like Jonson, Webster, Marlowe and Shakespeare, as well as French writers like Corneille and Racine.

Students (and faculty) will read different parts of this five act play. Characters include  Hecuba & Andromache (the two lead female roles, mothers of the victims); Astyanax & Polyxena (the two young victims); Agememnon & Andromache (who attempt to save the victims); Pyrrhus & Ulysses (their antagonists in their attempts to destroy the victims); and many others including Helen of Troy, the ghost of Achilles, Hector and the chorus of Trojans (which no tragedy can be without!)

There is something for everyone...and should be great fun! No previous acting experience required and everyone invited to participate (the more, the merrier!). Copies of the play can be sent by email in advance.

This year’s Bardic Reading will be performed via Zoom. Food will be available for pick-up outside King 105 beginning at 3:30pm.  Whether actively participating or just enjoying the performances, come grab a sandwich, beverage and snacks to take back to your room for the Zoom party. The marathon reading begins at 4 p.m.—join for all or part of the reading as your schedule permits!