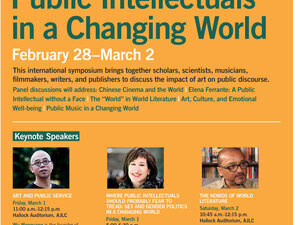 This international symposium brings together scholars, scientists, musicians, filmmakers, writers, and publishers to discuss the impact of art on public discourse.

How can art become a lingua franca that speaks to people from different parts of the world? What are the risks and rewards for cross-cultural translation, adaptation, and appreciation?

Drawing from the strengths of Oberlin College as a liberal arts institution, this symposium explores how the study of literature, art, music, and science can prepare students to become globally engaged citizens.

The symposium opens with the Chinese Independent Documentary Film Series: Oral History, Memory and Advocacy for Social Change. Four films will be shown followed by a discussion with the directors.

Join us for the first two films:

Faith in Ailao Mountain (2015, 56 minutes)
Directed by Ci Zhang
4:30-5:30 p.m.
Faith in Ailao Mountain is a visual recording of the true story of the writer and producer Zhang Ci May, as she travels back to Yunnan, China to visit her sick mother. May explores relationships with nature, a severely ill mother, god, and literature. Previously taboo subjects, China's one child policy, euthanasia, and the right to die, religious worship and spirituality, the synthesis of eastern and western cultures are shockingly documented, guided by the universal search for truth and artistic devotion to authentic voice.

Bumming in Beijing: The Last Dreamers (1970, 70 minutes)
Directed by Wu Wenguang
7-8:10 p.m.
Considered to be a founding work in the New Documentary Movement, Bumming in Beijing creates a portrait of five different artists before and after the events of Tiananmen Square.