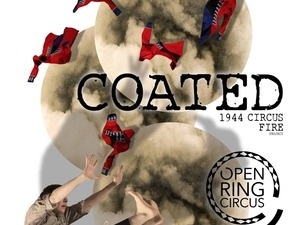 Open Ring Circus was originally established as a small open mic night based in a loft in Montreal that provided space for circus and experimental performance artists to show works-in-progress and receive feedback in a supportive environment.

Though Open Ring Circus later developed into a production company, the original event remains a regular Montreal institution. Open Ring produced the company’s first full-length show, ‘‘The Canary’s Silence’’ in 2014. This show was initially developed and presented in Montreal, with additional performances at the New England Center for Circus Arts (2016) in Brattleboro, VT,  and the International Festival of Arts and Ideas (2017) in New Haven, CT.

In 2018, Open Ring received a grant from the Connecticut Office of the Arts to develop ​‘‘Coated​,’’ a show that explores the Hartford Circus Fire of 1944.