Olive Klug at the Cat 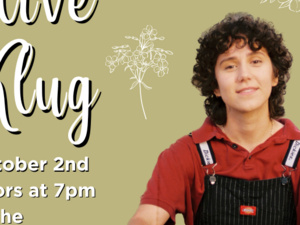 A key player in the new wave of contemporary folk singers, Olive Klug is an independent singer/songwriter with a rare vocal gift. Self-styled after genre icons like Joni Mitchell and Brandi Carlile, Olive is known for their beautiful tone and vividly honest storytelling. Their sound is reminiscent of the Golden Age of American Folk Music, but with a uniquely modern lyrical sensibility. Following the success of their Tiktok video previews, Olive released a series of new singles in the Spring and Summer of 2021. These songs chronicle Olive's struggle to make sense of a senseless world and reflects their experience with queer identity, ambivalence in romantic relationships, and the struggle to establish adulthood in unprecedented times. Olive released their single "Self Help" on February 4, 2022, a bittersweet tear-jerker about personal growth that received critical acclaim from multiple press outlets.

Olive Klug at the Cat