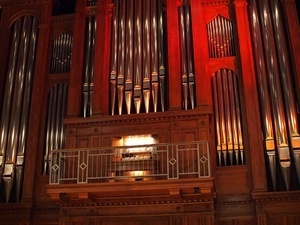 Internationally recognized as one of the leading centers of organ instruction in America, Oberlin Conservatory of Music is the home of an impressive collection of organs, currently standing at an astonishing 33 instruments.

Fairchild Chapel's Brombaugh Op. 25 instrument was built in 1981 and is a meantone organ in the 17th-century North German style.

Warner Concert Hall is home to two organs. The Harrold Op. 11 is another meantone organ and is in the Spanish Baroque style. It was built in 1989 and installed at Oberlin in 2019. The 1974 Flentrop tracker organ III/44 is a is a three-manual instrument with 44 stops, four couplers, and 3,400 pipes.

Closing the program is the instrument at the heart of Oberlin's collection—the C.B. Fisk Op. 116, built in 2001. This three-manual, sixty-stop organ of seventy-eight ranks and 3951 pipes was designed after Cavaillé-Coll in the French Romantic style.