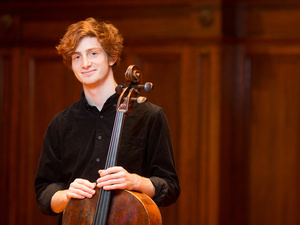 Aaron Wolff '17, from Newton, MA, is a fifth-year double-degree student in cello performance and comparative literature. As a high school student, he won first prize in the Boston Symphony Concerto Competition, as well as competitions that led to performances with A Far Cry and the Boston Trio. Now a student of Darrett Adkins, Wolff received the 2014 Agnew Bach Prize from the Cleveland Cello Society. At Oberlin, he has developed a passion for new music through his work in the Contemporary Music Ensemble, the Performance & Improvisation program, as a member of the student-run new music collective Semble N, and in the chamber ensembles Whitefish and Trio Ligatura, both of which have appeared in the Oberlin Honors Showcase at the Kennedy Center. Wolff’s love of chamber music began at an early age and has been fostered through summers at the Perlman Chamber Music Workshop, Yellow Barn Young Artist Program, Sarasota Music Festival, Shasta Music Summit, and Bang on a Can Festival. Equally at home with solo repertoire, he has participated in master classes with Steven Isserlis, Gary Hoffman, Joel Krosnick, Matt Haimovitz, Steven Doane, Desmond Hoebig, Timothy Eddy, Zuill Bailey, Laurence Lesser, and Hans Jensen. Wolff also enjoys acting, appearing most notably in a leading role in the Coen Brothers’ film A Serious Man, and in Oberlin productions of John Logan’s Red, Brecht’s Caucasian Chalk Circle, and Aaron Jay Kernis’ Goblin Market, where he was the featured narrator.