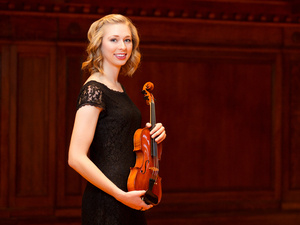 A performance by the Oberlin Orchestra conducted by Raphael Jiménez, with Christa Cole, violin soloist, the 2016 Senior Concerto Competition winner.

Violinist Christa Cole '17, from Boise, Idaho, currently studies at Oberlin Conservatory of Music under the tutelage of David Bowlin. She made her solo debut with the Meridian Symphony Orchestra in 2012, playing the Saint-Saëns Violin Concerto. While a student at Oberlin, she has performed Joan Tower’s Night Fields for string quartet on the Orientation Recital, and Shulamit Ran’s Inscriptions for solo violin in the Danenberg Honors Recital. Her summer studies have included quartet fellowships at the University of Nebraska-Lincoln Chamber Music Institute and Credo Chamber Music Camp. She has also attended Madeline Island Chamber Music Camp, Round Top Festival Institute, and the Boston University Tanglewood Institute Young Artists Orchestra Program.

Through these programs, Cole has worked closely with members of the Arianna, Jupiter, Chiara, and Jasper String Quartets, among others. An avid chamber musician, she spent a month in Boston with her quartet formed at Oberlin, the Ginkgo Quartet, performing outreach concerts and studying with the Muir String Quartet.

In 2014, Cole participated in the inaugural String Quartet Intensive program at Oberlin, working with the Cavani and Jupiter String Quartets. She has also had the opportunity to perform in master classes for Christian Tetzlaff, Punch Brothers, Charles Castleman, Rachel Barton-Pine, and Stephen Shipps.