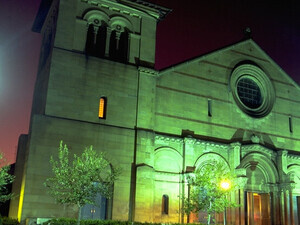 French-born pianist Monique Duphil entered the Conservatoire National Supérieur de Paris at the age of 10, studying under Jean Doyen, Marquerite Long, and Joseph Calvet. Having won a Premier Prix in piano at 15, she graduated the following year with a Grand Prix in Professional Chamber Music, under the tutelage of Pierre Pasquier. Duphil obtained her Artist Diploma from the Musikhochschule of Stuttgart, Germany. Her other teachers include Harriet Serr and Vladimir Horbowski. Duphil also made her Paris debut at age 15, performing Felix Mendelssohn’s Piano Concerto in G Minor, Op. 25 with the Orchestre de la Société des Concerts du Conservatoire. This was followed by prizes in four international competitions, including the Chopin Competition in Warsaw, which launched Duphil into a worldwide career.

In recognition of her spectacular debut in the United States with the Philadelphia Orchestra, in which she substituted for cellist Mstislav Rostropovich with only a few hours’ notice, Duphil was honored to be re-engaged by Eugene Ormandy to appear with him four times in 1980, performing two concertos on each occasion. Invited to Berne by Charles Dutoit, she recorded Alberto Ginastera’s Piano Concerto No. 1 in live performance for the Swiss Radio. Yoel Levi chose her to premiere Roger Sessions’ Piano Concerto with the Cleveland Orchestra.

Duphil has recorded for Polydor, Telefunken (Japan), Marco Polo, Naxos, and Eclectra (Canada) labels. Her upcoming performances include engagements in Eastern Europe, Japan, South America, and tours with the New Zealand Symphony Orchestra and the orchestras of the Australian Broadcasting Corporation. Duphil was on the faculty of the Hong Kong Academy for the Performing Arts before her appointment to Oberlin in 1992.

A native of Youngstown, OH, soprano Amber R. Monroe ’17 is completing her third year as a vocal performance major at Oberlin, where she studies with Timothy LeFebvre. In 2014, Monroe made her Oberlin Opera Theatre debut as Lady Billows in Benjamin Britten’s Albert Herring. In subsequent productions, she performed the roles of the Old Lady in Michael Torke’s Strawberry Fields and, most recently, of Harriet Tubman in a condensed version of Nkeiru Okoye’s Harriet Tubman: When I Crossed the Line to Freedom.

In addition to participating in master classes with such artists as Lawrence Brownlee, Danielle Orlando, Eric Owens, and John L. Demain, Monroe has also attended a number of summer programs in the pursuit of her craft. These include the Italian Opera Study Abroad program held in Pisa and the Oberlin in Italy program in Arezzo, where, as an Emerging Artist, she performed the role of Seleuce in a scene from Handel’s opera Tolomeo. In 2015, she was seen as Helena in Benjamin Britten’s A Midsummer Night’s Dream with the Chicago Summer Opera before continuing on to New York to win the Vocal Arts Competition for Emerging Artists. In summer 2016, she will participate once again in the Oberlin in Italy program, performing the title role in Puccini’s Suor Angelica.

Jonathan William Moyer AD ’12 maintains a dynamic career as an organist, pianist, singer, and conductor. He specializes in a vast repertoire from the renaissance to the 21st century, and he has performed throughout the United States, Europe, and Japan, including such venues as Washington National Cathedral, the Musashino Civic Cultural Hall in Tokyo, and at the Dvôrák Spring Festival in Prague and Vienna. He is a member of the critically acclaimed early music vocal ensemble Quire Cleveland.

At the Church of the Covenant in Cleveland, Moyer oversees a music program consisting of a professional and amateur choir, children’s youth and handbell choirs, one of Cleveland’s largest pipe organs (E.M. Skinner/Aeolian Skinner/Holtkamp), the Newberry baroque organ (Richards Fowkes), and a 47-bell Dutch carillon.

In 2008, Moyer performed the complete organ works of Olivier Messiaen in four recitals at the Cathedral of Mary Our Queen in Baltimore, celebrating the centenary of the composer’s birth and the renovation of the cathedral’s organ. Also that year, he received second prize in the Sixth International Musashino Organ Competition in Tokyo, Japan. In 2005, he was one of four finalists in the St. Albans International Organ Competition. He has served on the executive committee of the Cleveland Chapter of the American Guild of Organists as well as adjudicated for the American Guild of Organists Quimby Young Artist Competition and the National Organ Playing Competition in Fort Wayne, IN.