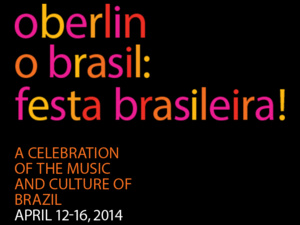 Join us for a celebration of the music and culture of Brazil! We're having a Festa Brasiliera from April 11-16 featuring Brazilian music, dance, history, and more.

April 11 Fridays@7 Post-Concert: Brazilian Carnival.
Brazilian sensation Kenia brings her ensemble to Severance Hall for a taste of Carnival. Admission is included in your ticket to the Fridays@7 concert, which is $10 for students and starts at $35 for everyone else. The carnival will start at around 8:15.
Severance Hall, Cleveland

April 12 Lecture on the History of Carnival by Kenia
1pm, Craig Lecture Hall in the Science Center.

April 13 Screening of Mystery of Samba, a documentary about Portela, a Samba school in Rio de Janeiro.
7pm, Nancy Dye Lecture Hall in the Science Center.