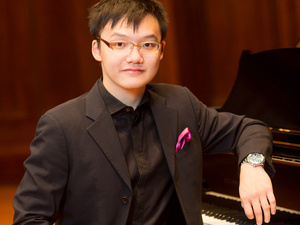 A performance by the Oberlin Chamber Orchestra conducted by Raphael Jiménez, with piano soloist Shiyu Yang, the 2016 Senior Concerto Competition winner, and the premiere of a work by Oberlin student composer, William Bolles-Beaven.

Yang has given recital performances in Daegu and Seoul, South Korea as well as in Pu Dong and prominent venues in Shanghai, China including the Municipal Music Hall and Oriental Art Center. He also performed as soloist in Beethoven’s Third Piano Concerto with the Shanghai Philharmonic Orchestra in 2012. At Oberlin, Yang was awarded the 2015 Rudolf Serkin Prize.