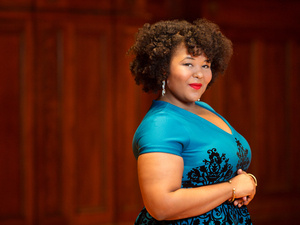 A native of Youngstown, Ohio, soprano Amber R. Monroe is completing her final year at Oberlin Conservatory in vocal performance where she studies with Timothy LeFebvre. Monroe’s work in Oberlin Opera Theater productions has ranged from the main stage at Hall Auditorium to contemporary operas in non-traditional venues. She has performed the roles of Lady Billows in Benjamin Britten’s Albert Herring, Old Lady in Michael Torke’s Strawberry Fields, and the title role in Nkeiru Okoye’s Harriet Tubman: When I Crossed the Line to Freedom in collaboration with Cleveland Opera Theater.

Monroe has performed and studied in summer programs both in the United States and Italy including the Italian Opera Study Abroad program in Pisa; the Chicago Summer Opera, covering the role of Helena in Britten’s A Midsummer Night’s Dream; and two summers at the Oberlin in Italy program in Arezzo, Italy—first as an Emerging Artist and the second performing the title role in Puccini’s Suor Angelica. In summer 2015, Monroe was awarded Grand Prize at the Vocal Arts Competition for Emerging Artists, held in New York City.

On the concert stage and in oratorio, Monroe has been a featured soloist in Schubert’s Mass in G Major, Vivaldi’s Gloria, as well as in a Lincoln Center performance of Roland Carter’s Hold Fast to Dreams with the Tuskegee University Golden Voice Concert Choir. Last spring, Monroe performed as the soprano soloist in Stephen Hartke’s Symphony No. 4 with the Oberlin Orchestra.

Maurice Cohn ’17 is in his final year at Oberlin, where he is a candidate for a Bachelor of Music in cello performance studying with Darrett Adkins and Gwen Krosnick. He studies conducting with Raphael Jiménez and Tim Weiss, and since 2013 has been assistant conductor for the Northern Ohio Youth Orchestras. Recent conducting engagements include concerts with the Oberlin Sinfonietta and Chicago’s Zafa Ensemble. Cohn has also been a conducting fellow at the Baltimore Chamber Orchestra conducting master classes, at Peabody under the direction of Markand Thakar, and as a cellist, attended the Aspen and Bowdoin music festivals. In addition to his musical studies, Cohn is pursuing a Bachelor of Arts at Oberlin, where he studies history and mathematics.