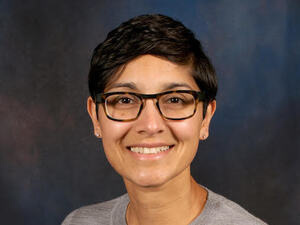 The Department of Philosophy 2019 Rhoden Lecturer is Meena Krishnamurthy, assistant professor of philosophy at Queen’s University.

Professor Krishnamurthy works on a variety of topics in political philosophy. She is currently writing a book manuscript and a series of related papers on Martin Luther King Jr.’s political philosophy. Her talk will be titled “Overcoming White Blindness,” and it will be followed by a Q & A period.

This event was rescheduled from November 1.

Abstract: The political inaction of the white moderates was a constant concern for black civil rights activists in the United States. According to black “intellectualists” such as Ida B. Wells, individuals fail to engage in political action to end racism because they lack propositional moral knowledge that an action, such as lynching, is morally wrong.

In contrast, black “emotionalists” such as W.E.B. Du Bois and Frederick Douglass, held that political inaction occurs when individuals lack the right sorts of emotions and desires.

I argue that Martin Luther King Jr. offered a position that differed from what black thinkers standardly offered as a model of how political motivation works. King believed the white moderates failed to engage in political action because they lacked phenomenal moral knowledge—knowledge of what it is like to be victimized by a particular wrong such as racial segregation.

King believed that, without this knowledge, the right sorts of emotions and desires were unlikely to be activated.

I close by arguing that the white moderates can (partially) acquire this type of knowledge through democratic propaganda and disruptive protest.