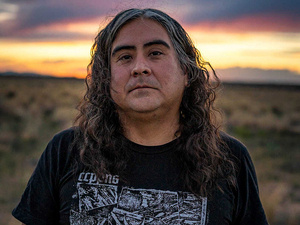 ARTIST TALK at 4:30 p.m.
with Raven Chacon
TIMARA Gallery in the lower level of Bibbins Hall

Oberlin's Modern Music Guild is excited to present a portrait concert of the works of Raven Chacon, performed by Oberlin students! The concert will feature a plethora of incredible works spanning the last 18 years of Chacon's compositional output, including pieces for solo violin, trumpet and electric guitar, string quartet, performers and turntable, and large ensemble.

Journey of the Horizontal People (2016)
for string quartet

Round (2007)
for many performers and turntable

Originally from the Navajo Nation, Raven Chacon is a composer of chamber music, performer of experimental noise music, and an installation artist. He was awarded the 2022 Pulitzer Prize in music for his piece Voiceless Mass.

Chacon’s work explores sounds of acoustic handmade instruments overdriven through electric systems and the direct and indirect audio feedback responses from their interactions. His compositions are written for a variety of ensembles, musicians and non-musicians, and for social and educational situations.

Chacon is a member of the Indigenous art collective Postcommodity, founded in 2007, which premiered the two-mile land art/border intervention, Repellent Fence, in 2015. Together with Cristóbal Martínez and Kade L. Twist, Chacon created this intervention of 26 balloons that intersected the United States-Mexico border near Douglas, Arizona, and Agua Prieta, Sonora. The 2017 Whitney Biennial features Postcommodity’s 2016 video installation A Very Long Line, in which a camera rapidly moves along the border to a discordant soundtrack, as if from the perspective of a passenger in a car. The collective’s work has received support from the American Composers Forum (2008), Arizona Commission on the Arts (2009), Joan Mitchell Foundation (2010), Creative Capital (2012), Art Matters (2013), and the Native Arts and Cultures Foundation (2014). Chacon’s work has also been presented at the Vancouver Art Gallery, ABC No Rio, REDCAT, Musée d’art Contemporain de Montréal, San Francisco Electronic Music Festival, Chaco Canyon, Ende Tymes Festival, 18th Biennale of Sydney, and the Kennedy Center, among other venues. Postcommodity most recently exhibited at documenta 14.

As an educator, Chacon has served as composer-in-residence for the Native American Composer Apprentice Project, where he taught string-quartet composition to hundreds of American Indian high-school students on reservations in the Southwest. In 2011, the project received the National Arts and Humanities Youth Program Award from the President’s Committee on the Arts and the Humanities. Chacon has served on the Music and Native American Studies faculties at the University of New Mexico and as a visiting artist in the New Media Art & Performance program at Long Island University.

Chacon earned his MFA at the California Institute of the Arts.

Biographical material courtesy of The American Academy in Berlin.

portrait of man with long dark hair, standing outside with setting sun behind