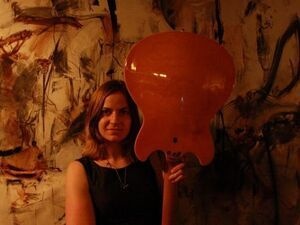 Sandy Ewen is an experimental guitarist, artist and architect who has recently relocated to NYC from Houston, TX. Her current projects include the trio Etched in the Eye, a duo with Tom Carter called Spiderwebs, the trio Garden medium, and ongoing collaborations with percussionist Weasel Walter and bassist Damon Smith.

Ewen has spent much of 2017 touring, performing solo sets and in collaboration with Steve Jansen (tapes and electronics) and Maria Chavez (turntables) around Europe.

In years past, Ewen has performed alongside Roscoe Mitchell, Keith Rowe, Lydia Lunch and many others, and has performed and recorded with Jaap Blonk, Henry Kaiser and more. In 2014 she performed at San Francisco's 13th Annual Outsound New Music Summit, and she has made several appearances at Austin's annual No Idea Festival.

Her groups Garden medium, Spiderwebs, Etched in the Eye & Ewen/Smith/Walter all released albums in 2016. Ewen's approach to playing is centered around found objects and extended guitar techniques.