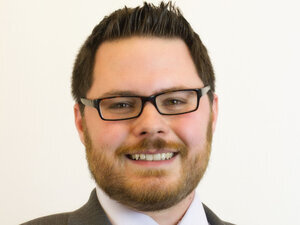 We often hear from men that they want to be more involved in preventing and responding to sexual violence but don't know how. Come meet Alex Leslie, senior director of educational services, Cleveland Rape Crisis Center, who has over a decade of experience working to prevent and respond to sexual violence.

Leslie will be talking about how men can become more involved in these vital efforts.

Leslie is a passionate advocate for the prevention of sexual violence as well as an accomplished public speaker, facilitator, writer, curriculum developer, and strategic planner. Leslie has been engaged in sexual violence prevention for the last 15 years. In his role at Cleveland Rape Crisis Center (CRCC), he has designed prevention programs and strategies to reach youth, boys and men, adults in the community, and college students.  With CRCC’s help, he created the Youth 360 leadership program, a nationally recognized “innovation in prevention.”

As a national expert and consultant, he has presented to universities from California to Georgia, and everywhere in between.  He has also presented to members of the US Air Force stationed in Germany as well as other branches of the military here in the US.

He has authored articles and contributed to publications in Ohio and New York.  Leslie holds a MBA in Organizational Development and Leadership from Case Western Reserve University’s Weatherhead School of Management and a BA from the College of William & Mary in Virginia.