Matt Gatton: Pré-pré-cinéma and the Dawn of Everything 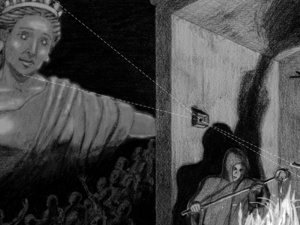 Archeological reconstructions of Paleolithic animal-hide tents uncovered an unanticipated effect: light passing through small holes in the tents projected images on the interior walls. The holes formed camera obscuras. (A camera obscura may sound like a piece of modern technology but is, in fact, nothing more than optical physics behaving in a predictable manner.)

We researchers, armed with a modern knowledge of optics, explored the effect in situ, found it replicated in other tents, and used Bayesian statistical analysis to model the frequency of the phenomenon. How human antecessors would have reacted to the images is another matter entirely. The illusions appear against the backdrop of the real world, which we are conditioned to believe. We have a certain faith in our perceptions: what we perceive is truth. When an ‘other’ reality appears within reality, it likewise becomes true.

Projected images read as spirits manifest, the sine qua non of religious thought, but as importantly, plant the idea of a visual referent, that an image can refer to a thing, which is the seed of art.