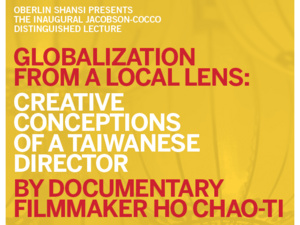 She represents the new wave in Taiwanese cinema. Her films include Wandering Island (2009), The Gangster’s God (2006) and El Salvador Journal (2008), that won the Documentary - Special Award in Taipei Film Festival.

Her lecture will follow screenings of two of her films: Sock 'n' Roll on March 12 and My Fancy High Heels on March 13, and the Symposium, Asian Cinemas in a Global Context.

Ho Chao-ti's presentation is the Inaugural Jacobson-Cocco Distinguished Lecture, a series endowed by Oberlin Shansi in honor of former Executive Director Carl Jacobson and Associate Director Deborah Cocco. Learn more about the events of the weekend of March 14.