Languages Over Lunch with Hal Sundt 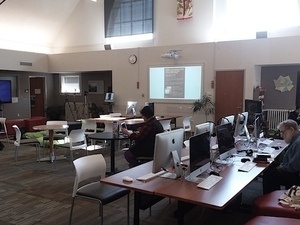 ‘‘Giving Up the Ghost—The Function of the Personal Essay in Literary Journalism,’’ is topic of presentation by Visiting Assistant Professor of Rhetoric and Composition Hal Sundt.

Twenty years after its publication, Susan Orlean’s masterpiece of nonfiction, The Orchid Thief, continues to excite and puzzle aspiring writers because the book largely works in spite of itself. Orlean’s investigation into the subculture of orchid enthusiasts lacks a central character or clear narrative arc, which makes it difficult to discern on a first-read what exactly holds the book together.

The keys to its success elude even the most perceptive readers, including Orlean, with whom I spoke in March 2018. The book’s amorphous structure ultimately inspired one of the most original screenplays ever written, Adaptation, about the maddening process of writing. In one scene, Nicholas Cage, who plays the screenwriter tasked with adapting Orlean’s book, vents to his agent and tries to quit the project: “I can’t structure this. It’s that sprawling New Yorker shit … The book has no story. There’s no story!”

So how did Orlean write a classic work of literary journalism with no “story?”

My talk gives insight into the complex relationship between essayistic and journalistic writing by examining how Orlean utilizes essayistic digressions to connect seemingly disparate parts of research into a cohesive whole.

I animate my presentation through archival research of Orlean’s writing process, interviews (with Orlean, her editors, and her agent), and the personal narrative of my quest to see what Orlean spent her whole book looking for, but never found: a ghost orchid in bloom in the Florida swamps.