In the Presence of Women: Facing and Feeling Female Nudity at the Roman Floralia 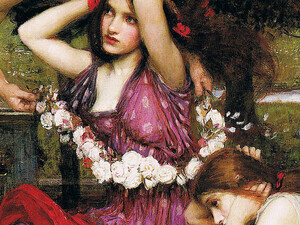 Molly Pasco-Pranger will present a talk that explores the dynamics of women’s public nudity in the early Roman empire. The talk will be centered  on the Floralia, a festival in ancient Roman religious practice in honor of the goddess Flora, and on the respective social and spatial contexts of that festival: the baths and the theater. In the early empire, these two social spaces regularly remove or complicate some of the markers that divide Roman women by sociosexual status. The festival and the ritual nudity within it focuses attention on the negotiations of social boundaries within these spaces, and the occasions for cross-class identification among women they provide.

Pasco-Pranger works on Roman literature and social history and has published several articles and a book on Ovid’s Fasti and the Roman calendar, on Latin elegy, and on Cato the Elder. She teaches Latin at all undergraduate levels, Greek when she gets a chance, and a variety of undergraduate courses in Greek and Roman civilization and literature.