"In the Moment: Improvisations in Poetry from Around the World" 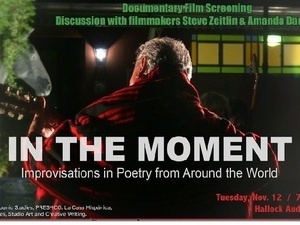 In the Moment reveals a world of improvised poetry traditions and competitions, and explores their variety, commonalities, history, and complexity. The hour-long documentary introduces the viewers to payadores, emboladores, decimistas, extempo artists and more from Argentina, Uruguay, Canary Islands, Brazil, Portugal, Italy, Trinidad, the Basque region of Spain, Kazakhstan, and Kyrgystan as well as freestyle rap artists from the United States.

The film features charismatic poets and musicians who are masters of the art of improvisation, dueling with one another and commenting on the meaning of the traditions and of life itself in improvised rhymes. Performances and interviews with poets are interwoven throughout the film, giving the viewer an opportunity to learn about individual traditions through featured poets and to see the interconnections between the traditions.

In the Moment is directed and produced by folklorists and filmmakers Amanda Dargan and Steve Zeitlin. Academy Award-winning filmmaker Paul Wagner serves as the executive producer.

The film also draws on five acclaimed poets and scholars: Edward Hirsch (poet, folklorist, and director of the Guggenheim Foundation); Bob Holman (poet and producer for The United States of Poetry on PBS); the late professor John Foley (head of the Oral Traditions Program at the University of Missouri); Argentinians folklorist Ana Cara and Ercilia Moreno Cha. Among the highlights of the film are scenes shot by the filmmakers at the Festival de la Doma in Jesus Maria, Argentina, in which payadores improvise songs about each of the horse breaker riders.

The film is the culmination of a 20-year documentation effort to chronicle these traditions beginning with filming done for the 1999, 2001, 2003, and 2006 People’s Poetry Gatherings.

flyer announcing the movie In the Moment