Historical Archetypes of Masculinity and Femininity: The Kotha and the Akhara 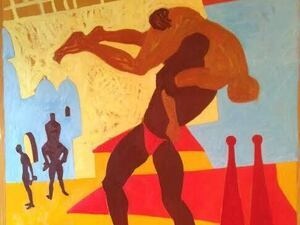 Historical Indian Archetypes of Masculinity and Femininity: The Kotha and The Akhara

This exhibition consists of a body of artwork inspired by spending time and making art with two contrasting communities in Indian society, sex workers, and Indian wrestlers. I am viewing the sex workers on the streets of Kolkata as the cultural descendants of the “courtesan,” the archetype of femininity whose world of protocol and procedure could not adapt to transformations brought by modernity. Over the centuries there have been all types of women giving sexual services from the vesya who provide sexual services to devadasi, or temple dancers, to highly respected mujarewali or courtesans who were patronized by the elite of society. The Kotha (the residence of the courtesans) was respected while the fine aesthetics and arts of seduction shrouded the sale of the female body. Their descendants, disenfranchised sex workers face a contrasting world of survival and scorn, as outcasts living on the margins of society. Presently, Red light districts are pushed out, usually crime ridden and in disrepair.

I seek to thread together the historical archetype of femininity, the culture of the Kotha with the historical archetype of Masculinity, the Pahalwan and the culture of the Akhara through visual form. The Akhara is an outdoor gymnasium located in the middle of a city usually near a water source. The Pahalwan is the Indian wrestler that wrestles in cultivated dirt, made of clay, turmeric and gee. Kusti is, to wrestle. Kusti, a deep-rooted Indian tradition similar to the Kotha in that both exploit the human body creating meaning through formalities of discipline and mastery of arts.

Historically, from an early age, boys commit their lives to the culture of physical power and self-discipline. They practice celibacy, eat a strict diet supplemented by large amounts of almonds and dairy products. The Indian wrestling Kushti, and free-style wrestling are very similar in terms of technique and rules, but the differences are vast between wrestling in a mud pit from on a mat. The smooth mat has very little traction. Wrestlers need to make quick moves to pin the opponent. Bouts are very short, two minutes each. In Kushti the mud surface can be dug into with the foot and knee, making long slow holds with extreme pressure. Each round is six minutes.

I’m threading these two figures together in the exhibition, looking at their adaptations and circumstances today.

There will also be a catalogue with this exhibition with essays by three professionals: Bhaskar Mukhopadhyay, an anthropologist, historian, and cultural theorist; Pamela Karmini, author of Domesticity and Consumer Culture in Iran: Interior Revolutions of the Modern Era (Routledge, 2013) and Sarah Schuster, artist and associate professor at Oberlin College.