Harriet Tubman: When I Crossed That Line to Freedom (Pre-Concert Panel Discussion @ 5:30 pm) 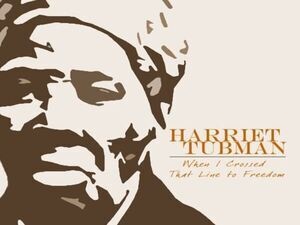 Harriet Tubman: When I Crossed That Line to Freedom

Music and libretto by Nkeiru Okoye ’92

There will be a pre-concert panel discussion beginning at 5:30 pm in Finney Chapel.

An exciting new operatic work by Nkieru Okoye ’92 that tells of how a young girl born in slavery, becomes Harriet Tubman, the legendary Underground Railroad conductor.

Experience this heartwarming tale of two sisters vowing that nothing but death will separate them, despite the slavery threatening to tear them apart. The music is richly textured, drawing from the musical traditions of opera, gospel, American spirituals, ragtime and minstrel songs.

Based on recent Tubman biographies, the story is narrated and told in the context of Tubman’s tight-knit family of lively characters. Harriet Tubman carries the universal themes of sisterhood, courage, sacrifice and doing what is necessary to keep a family together.

This touring co-production with the Oberlin Opera Theater is part of the Cleveland Opera Theater New Opera Initiative, and is the Midwest premiere of the opera following the New York City World Premiere production in February 2014.

Hailed as “achingly beautiful,” by the Baltimore Sun, compositions by composer Nkeiru Okoye ’92 [in KEAR roo oh KOY yeh] have been performed by performing organizations such as the Philadelphia, Detroit, Virginia, Indianapolis, Grand Rapids, Richmond, Mississippi, Tacoma, and New Jersey Symphony Orchestras, and numerous regional orchestras, nationwide. Okoye’s opera, Harriet Tubman: When I Crossed that Line to Freedom, received a 2013 Arts Works grant from the National Endowment for the Arts.

Okoye’s music has been presented at the International Consortium for Music of Africa and its Diaspora at (Oxford University, UK), Dialogue Between China and Africa in Music and Halim el-Dabh Symposium (Central Conservatory of Music, Beijing, People’s Republic of China), the Athena Festival of Women in Music (Murray, KY), and the Gateways Festival (Eastman School of Music, Rochester, NY); and conferences of the College Music Society, National Association of Schools of Music, The African American Art Song Alliance, and National Association of Teachers of Singing.

An exciting voice in the field of contemporary classical and education/family repertoire, Okoye’s music is notable for its appeal to diverse audiences and infusion of popular music genres. Her best known works include Brooklyn Cinderella (2011, commissioned by American Opera Projects), Songs of Harriet Tubman (2007-08, recorded by the Dvorak Symphony Orchestra), Phillis Wheatley (2005 recorded by the Moscow Symphony), Voices Shouting Out (2002, commissioned by the Virginia Symphony); and Afrikan Sketches (2007-08, published in the Oxford University Press Anthology of Piano Music of the African Diaspora ).

As a frequent guest lecturer and panelist, Okoye was a composer mentor at the University of Ghana for the 2005 International Society of Contemporary Music’s World New Music Days. In 2006, she was winner of a British American Project Fellowship.

A native New Yorker of African American and Nigerian decent, Okoye was honored at Nigeria’s 40under40 ceremony, in Lagos. A polymath who designed the acclaimed “Canbie Collection,” of multicultural, soft sculpture dolls, Okoye decided to pursue training as a composer at the age of 13, when her first original composition won first prize at a national competition. She went on to receive a bachelor’s degree in music composition and theory from the Oberlin Conservatory of Music, and a master’s and PhD in composition and theory from Rutgers University.

Okoye currently is director of music theory and composition at the State University of New York at New Paltz.

Julius P. Williams is an award-winning conductor, composer, recording artist, educator, author, and pianist. His career has taken him from his native New York to musical venues around the globe, and has involved virtually every musical genre. Maestro Williams’ Carnegie Hall conducting debut was with the Symphony Saint Paulia inaugural concerts in 1987 in New York. He has conducted American orchestras in Dallas, New Haven, Savannah, Hartford, Sacramento, Tulsa, Knoxville, Oklahoma, Vermont, Akron, Paducah, Norwalk, the Vermont Philharmonic, and Wooster Symphony in Ohio. In addition, he directs the Armor Artist Chamber Orchestra, the Connecticut Opera, Kalistos Chamber Orchestra in Boston, and the Trilogy Opera Company, where he is music director and conductor. He was music director of the Washington Symphony (1998-2003), which was the official orchestra of Washington, D.C. One of the most prestigious performances was the 30th anniversary of the Peoples Republic of China at Constitution Hall in Washington, D.C., as well as conducting a celebration at the Chinese Embassy later that year. He was also the artistic director of the Music Festival of Costa del Sol, Spain, and artistic director of the School of Choral Studies of New York State Summer School of the Arts for 10 seasons. Other appearances include, the Tri-C Jazz Festival in 1999 in Cleveland, Ohio, where he opened the season conducting a powerful performance of Duke Ellington’s Sacred Service. He has served as assistant conductor to the late Maestro Lucas Foss with the Brooklyn Philharmonic and with the American Symphony in New York. He also has served as cover conductor for the Boston Pops Orchestra (BSO) and the Rhode Island Philharmonic.

A prolific composer, Maestro Williams has created dozens of works for virtually every genre of contemporary classical performance, including opera, ballet, orchestra, chamber ensemble, chorus and solo voice, dance, musical theatre, and film. His music has been performed by countless symphony orchestras and chamber ensembles around the globe. He has served as composer-in-residence of Connecticut’s Nutmeg Ballet Company, which premiered his ballet Cinderella. His Norman Overture was premiered by the New York Philharmonic, conducted by Zubin Mehta. The opera Guinevere was performed at the Aspen Music Festival and at Dubrovnik Music Festival in Croatia. He composed the film score What Color is Love? as well as the theatrical production to In Dahomey. His cantata A Journey to Freedom for the Reston Choral and Festival Orchestra in Virginia was recorded on his album Somewhere Far Away on Albany Records in 2009. The Detroit Symphony premiered his moving musical tribute to the victims of September 11, In Memoriam, also recorded on Albany Records. He recently composed the music Dreams for the Boston Children’s Choir concert Raising the Roof, which was televised on national television and recorded on their 2010 CD release. Maestro Williams has served as conductor/composer of the Connecticut Arts Award for Public Television. His film score for Lifetime TV’s Fighting for Our Future won the Gracie Allen Documentary Award in 2003.

In addition to his conducting and composing careers, Williams maintains a demanding schedule of speaking engagements, consulting, and academics. A dedicated educator, Williams has served on the faculties of Wesleyan University, the University of Hartford, and University of Vermont. He has been visiting conductor of Orchestra at Skidmore College in Saratoga, NY, affiliate artist-teacher of composition at Purchase College of the State University of New York, and visiting associate professor and Jessie Ball Dupont Scholar at Shenandoah University and Conservatory in Virginia. He is presently professor of composition and conducting at the Berklee College of Music in Boston, MA. Williams is presently a member of the Board of Directors of the Conductors Guild. He is the author of an article on Duke Ellington (Emerge Magazine, 1999), and is co-author/editor of a vocal anthology on Hall Johnson (Carl Fischer, 2003).

Maestro Williams is the recipient of awards for musical and academic achievement including an honorary doctorate from Keene State College in New Hampshire, the Detroit Symphony Emerging Composer Award, Gracie Allen Documentary Award, Distinguished Medal of Artistic Achievement of the Ecuador Youth Symphony Orchestra Foundation, Honorary Distinguished Alumnus Award of Langston University, National Culture of the Arts Award of the Association of Foreign Language Teachers of New York, and he has received ASCAP Awards in composition for the past twenty years.