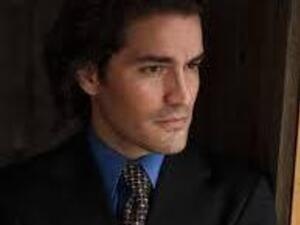 This concert has been moved from Stull Recital Hall to Warner Concert Hall at 8 pm on Wednesday, January 29, 2014.

Admission is free and open to the public.

ZUILL BAILEY is widely considered one of the premiere cellists in the world. His rare combination of celebrated artistry, technical wizardry, and engaging personality, have secured his place as one of the most sought after and active cellists today.

Mr. Bailey has appeared at Disney Hall, the Kennedy Center, the United Nations, Alice Tully Hall, the 92nd St. Y and Carnegie Hall, where he made his debut performing the U.S. premiere of Miklos Theodorakis’ “Rhapsody for Cello and Orchestra.” In addition, he made his New York recital debut in a sold out performance of the complete Beethoven Cello Sonatas at the Metropolitan Museum of Art.

Zuill Bailey is an exclusive recording artist on Telarc International. His “Bach Cello Suites” CD immediately soared to the Number One spot on the Classical Billboard Charts. Zuill Bailey’s critically acclaimed recordings  include his highly anticipated “Britten Cello Symphony/Sonata” CD, live performances of the Dvorak and Elgar Cello Concertos, with the Indianapolis Symphony Orchestra, “Brahms” complete works for cello and piano with pianist Awadagin Pratt, and “Russian Masterpieces” showcasing the works of Tchaikovsky and Shostakovich performed with the San Francisco Ballet Orchestra. Other releases include his innovative “Spanish Masters” CD for Zenph Studios, where he forms a unique duo blending with recordings of composer Manuel de Falla. His discography also includes a debut recital disc for Delos, Cello Quintets of Boccherini and Schubert with Janos Starker, Saint-Saen’s Cello Concertos No. 1 and 2 “Live,” and the Korngold Cello Concerto with Kaspar Richter and the Bruckner Orchestra Linz for ASV.

Zuill Bailey was awarded the Classical Recording Foundation Award for 2006 and 2007 for Beethoven’s complete works for Cello and Piano. The highly touted two-disc set with pianist Simone Dinnerstein was released on Telarc worldwide. In celebration of his recordings and appearances, Kalmus Music Masters is releasing “Zuill Bailey Performance Editions,” which encompasses the core repertoire of cello literature.

Mr. Bailey received his Bachelor’s and Master’s Degrees from the Peabody Conservatory and the Juilliard School. His primary teachers include Loran Stephenson, Stephen Kates and Joel Krosnick. Mr. Bailey performs on a 1693 Matteo Gofriller Cello, formerly owned by Mischa Schneider of the Budapest String Quartet. In addition to his extensive touring engagements, he is the Artistic Director of El Paso Pro-Musica (Texas), Artistic Director of the Sitka Summer Music Festival and Series, (Alaska), the Northwest Bach Festival (Washington), and Professor of Cello at the University of Texas at El Paso.