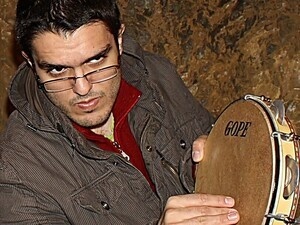 As an advocate of new music, José “Zeca” Lacerda has worked alongside composers such as Steve Reich, George Lewis, Elliott Sharp, Jeff Herriott, Christian Wolff, Bob Becker, and Stuart Saunders Smith, having premiered works by the latter four. A native of Santa Catarina, Brazil, he has performed with some of the country’s premier orchestras, including the Brazilian and the Petrobrás symphony orchestras.

Lacerda earned a bachelor’s degree in music performance from the Universidade Federal de Santa Maria. He also holds a master’s degree from the Frost School of Music at the University of Miami, where he studied with Svet Stoyanov and Matthew Strauss. He published an article on Stuart Saunders Smith in Percussive Notes in 2012, and in 2013 he released When Still: New Music For Vibraphone, an album of music for solo vibraphone through Soundset Recordings. He has also received scholarships from the Percussive Arts Society and Zildjian.

Lacerda is currently pursuing a doctoral degree in contemporary music at Bowling Green State University, specializing in music performance. He is also a teaching assistant for the percussion studio under the direction of Roger Schupp.