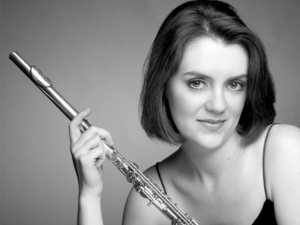 A native of Maine, flutist Roberta Michel now lives in New York City and is an active performer of solo, chamber, and orchestral music. Michel recently won the Artists International Special Presentation Award and was presented in her debut recital at Carnegie Hall’s Weill Recital Hall for which she was described in the New York Concert Review as a “solid craftsman” who “riveted with her performance, inspiring one to want a repeated hearing.” Michel has performed with groups throughout North America including the Portland String Quartet, SEM Ensemble, Philharmonic Orchestra of the Americas, Cheyenne Symphony, and the Greeley Philharmonic in venues including Lincoln Center, Carnegie Hall, Alice Tulley Hall, Merkin Hall, and The Kennedy Center.

Dedicated to the advancement of new music and described for her “extreme adventurousness” (New York Concert Review), Michel has premiered numerous works. She is a founding member of The Cadillac Moon Ensemble, a quartet dedicated to commissioning and performing new works. The group was recently signed on the New Dynamic Records label and will record its debut CD in October 2011. For more information, please see CadillacMoonEnsemble.com. Michel’s flute and piano duo, Duo RoMi, in addition to performing standard repertoire, is invested in performing new works and promoting composers of our day.

Michel holds a BM with highest honors from the University of Colorado at Boulder, an MM from SUNY-Purchase College, and a Doctor of Musical Arts from the City University of New York Graduate Center. Her teachers include Robert Dick, Tara Helen O’Connor, and Alexa Still. Michel has been a Bang on a Can Summer Institute fellow and a participant in the Institute and Festival of Contemporary Performance at Mannes College, as well as participating in festivals at Banff and Domaine Forget. She has taught at Purchase College and Hostos Community College and is currently on faculty at Great Neck Music Conservatory.