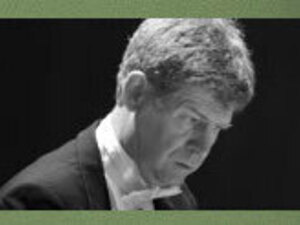 Ian Hobson is a musician of tremendous versatility who has earned an international reputation as a pianist, conductor, and educator. Born in Wolverhampton, England, Hobson studied music at the Royal Academy of Music and Cambridge University in England, and at Yale University in the United States. His international career was launched in 1981 when he won First Prize at the Leeds International Piano Competition, having already garnered silver medals at both the Artur Rubinstein and Vienna-Beethoven competitions. His teachers have included Sidney Harrison, Ward Davenny, Claude Frank, and Menahem Pressler.

Hobson's programs consistently demonstrate a repertoire that spans the centuries and demands an extraordinary command of styles and scholarly vision, in addition to great keyboard prowess. His recordings and recital performances encompass a cross section of works from mammoth to miniature: a series of works from The London Pianoforte School, the complete cycle of Beethoven Piano Sonatas, all of the Brahms Variations for Piano, as well as Rachmaninoff's Seventeen Études-Tableaux and Twenty-four Preludes, Chopin-Godowsky's Etudes, Bach's Goldberg Variations, and contemporary works written for him by Ridout, Lees, Liptak, and Gardner. An ingenious programmer, Hobson commemorated the 200th anniversary of the Franz Schubert's birth in a unique recital at New York's 92nd Street Y during the '97-98 season; entitled Homage to Schubert; the program comprised Ravel's Valses nobles et sentimentales, the great Sonata in G major, D894 by Schubert himself and the complete arrangements for piano of Schubert's compositions by Leopold Godowsky.

During the last several seasons, engagements have included appearances at Alice Tully Hall, at New York's Mostly Mozart Festival, performances of the Chopin and Moscheles concertos at the Bard Music Festival, and recitals in the US, England and Italy. He performed the Piano Concerto of Henry Holden Huss at Carnegie Hall with the American Composers Orchestra and the Concerto for Piano of Clara Schumann on Great Performers at Lincoln Center. He performed and recorded Paderewski's Piano Concerto and Fantasie Polonaise with the Sinfonia Varsovia conducted by Jerzy Maksymiuk in 1995. In January 1997 he performed and recorded the Henry Holden Huss Concerto and the Ernest Schelling Suite Fantastique with Martyn Brabbams and the BBC Scottish Symphony Orchestra.

Hobson is also active as an opera conductor with a wide range of repertoire ranging from Cimarosa and Pergolesi, Mozart and Beethoven through works by Johann and Richard Strauss. In September 1997 he conducted and recorded John Philip Sousa's comic opera "El Capitan" in a newly restored version with the Sinfonia da Camera and a stellar cast of young singers; the recording was released in January 1998 on the new Zephyr label recently founded by Mr. Hobson.

In January 1998 Ian Hobson formed Zephyr Productions, Inc. as the parent company for his new label, Zephyr Records. The inaugural releases on the Zephyr label included the complete Beethoven Piano Sonatas as well as the Sousa opera. Other recent releases include works by Falla and Ravel; two volumes of concertos by Ignaz Moscheles; the Schubert/Godowsky transcriptions for piano; and David Johnson's Twelve Preludes and Fugues for Piano. Upcoming releases will include music for two pianos by Saint-Säens/Liszt.

Mr. Hobson has made many recordings for other labels during the course of his career. Arabesque Recordings has produced more than twenty recordings by the artist. Recent releases on this label include "The Complete Solo Piano Transcriptions and Arrangements of Sergei Rachmaninoff," "The Complete Piano Variations of Johannes Brahms," "The Complete Piano Sonatas & Other Works of Robert Schumann," "Hobson's Choice" (a collection of the pianist's favorite pieces, exploring the multiple faces of virtuosity across three centuries of music). Recent releases include a disc of the "Piano Music of Benjamin Lees" for Albany Troy; the complete Mendelssohn "Works for Piano and Orchestra" for Arabesque; the Rachmaninoff "Early Piano Works," also for Arabesque; and the Huss Piano Concerto and Schelling "Suite Fantastique" for Hyperion.

With William Warfield and the Sinfonia da Camera, Hobson recorded Stravinsky's "L'Histoire du Soldat" and Walton's "Facade." BMG's Catalyst label has also released his recording of Kevin Oldham's Concerto for Piano, Op. 14, with the Kansas City Symphony under the direction of William McLaughlin. He has recorded Mozart's Piano Concertos Nos. 23 and 24 with the English Chamber Orchestra conducted by Sir Alexander Gibson for EMI. 2005 - 2014 © Ian Hobson