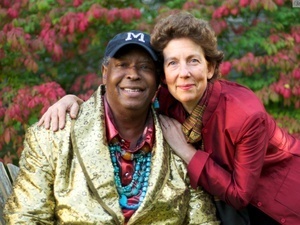 A conservatory guest recital by François Clemmons ’67, who will perform a selection of American Negro Spirituals with pianist Kate Gridley.

Traditional: Ah Woke Up This Morning With My Mind

Traditional: We Are Climbing Jacob's Ladder

arr. Roland Hayes: Sustah Mary Had A But One Chil'

arr. Roland Hayes: Lil Boy How Ol' Are You

arr. Clemmons: Nobody Knows The Trouble I See

François Scarborough Clemmons ’67 (born April 23, 1945 in Birmingham) is an opera singer, playwright, and lecturer best known for his appearances as Officer Clemmons on Mister Rogers' Neighborhood.

Clemmons was born in Birmingham, but his family moved to Youngstown, Ohio, when he was a child. He learned to sing negro spirituals from his grandmother and performed at school and church functions, later fronting a rock band. He studied music at Oberlin College and earned a master of fine arts at Carnegie Mellon University. He auditioned successfully for the Metropolitan Opera in Pittsburgh, Pennsylvania, and earned a position in the Opera Studio, performing with numerous companies across the country.

Clemmons joined the cast of Mister Rogers Neighborhood, portraying a police officer and owner of a singing and dance studio. He also continued to perform professionally. His performance as Sportin' Life in the Cleveland Orchestra's recording of Porgy & Bess won a Grammy in 1973.

In the 1980s, he returned to singing spirituals and founded a professional performing company, the Harlem Spiritual Ensemble, which he dedicated to "preserving, sustaining, and commissioning new and traditional arrangements of American Negro Spirituals for future generations." Many of Clemmons' real-life achievements were reflected on the program.

In his later career, Clemmons arranged a song-book entitled Song For Today, published by Strube Verlag of Munich, Germany, and wrote and produced a musical based on the life of Roland Hayes in 1997.

He is a member of Phi Mu Alpha Sinfonia, the national fraternity for men in music, of which Fred Rogers was also a member. Clemmons retired at the end of the 2012-2013 academic year.

Painter and musician Kate Gridley maintains a painting studio in Middlebury, Vermont, where she has lived and painted full time since 1991.

Gridley trained at the Mannes School of Music in New York for nine years, studying classical piano, theory and composition, before studying privately in college, culminating in an independent study and recital. Simultaneously, Gridley sang in auditioned choirs large and small, from madrigal ensembles, to barbershop quartets, Bach choirs, even a three-hundred-voice choir with the NY Philharmonic Orchestra.  In addition to founding The Allegro Chorus in Middlebury, VT, Gridley has accompanied on piano numerous singers, stage productions and local school events for the past fifteen years. She has performed in multiple stage productions at The Town Hall Theater. She is the accompanist at the Champlain Valley Unitarian Universalist Society.

Awarded a Hutchinson Memorial Fellowship for Painting on graduation from Williams College in 1978, Gridley pursued her studies in New York City before moving to Florence, Italy for a year and a half of full-time study of renaissance painting techniques. She began exhibiting regularly in New York and New England, starting in 1983.

Gridley’s installation “Passing Through: Portraits of Emerging Adults”, a set of 17 over life-size oil portraits paired with sound portraits (recorded by former NPR correspondent Anne Garrels) is travelling through New England.  Completed in 2013, and underwritten by the Vermont Community Foundation, The Vermont Folk Life Center, the Growald Family Foundation, and numerous private donors, it is about to open in Middlebury, Vermont, at two locations: The Jackson Gallery of Town Hall Theater, Inc., and The Mahaney Center for the Arts, Middlebury College.

Gridley is currently at work on a multi media portrait of Francois Clemmons, partially underwritten by the Vermont Arts Council.

Gridley’s paintings are in the collections of the Quantum Chemical Corporation, The Vermont Law School, The Vermont State House, The Federal Sentencing Commission, Phillips Exeter Academy, The Middlebury College Museum of Art, Norwich University, Green Mountain College, Middlebury College, The Keewayden Corporation, and private collections in Europe and across the United States. In 2010 she completed the official state portrait of the Honorable Governor Jim Douglas of Vermont, which hangs in the Vermont Statehouse, and in 2012 she unveiled the official portrait of the Honorable William K. Session III for his work as Chairman of the Federal Sentencing Commission, which hangs in the Thurgood Marshall Federal Judiciary Building, Washington D.C.  Her illustrations have appeared in a number of books, including The Cook and the Gardener, Art and the Gardener, Mission Rejected: Us Soldiers who say no to Iraq, and national magazines.