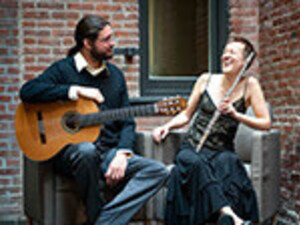 Damiana: Latin Meaning: One who tames; subdues. French and Greek Meaning: Untamed. People with this name have a deep inner desire to create and express themselves, often in public speaking, acting, writing or singing. They also yearn to have beauty around them in their home and work environment. People with this name are excellent at analyzing, understanding, and learning. They tend to be mystics, philosophers, scholars, and teachers. Because they live so much in the mind, they tend to be quiet and introspective, and are usually introverts. When presented with issues, they will see the larger picture. Their solitary thoughtfulness and analysis of people and world events may make them seem aloof, and sometimes even melancholy. Guitarist Dieter Hennings and flutist Molly Barth met through a mutual friend, Ricardo Zohn Muldoon. One of Ricardo’s major projects is an opera titled Comala. Of Comala, Ricardo writes, “The orderly flux of time has been derailed, and the borders between past, present, life, and afterlife have dissolved. Therefore, the dead and the living interact continuously. The living characters express themselves in normal speech, while the dead characters, including Damiana Cisneros, sing. The living act under the pressure of time, and seek immediate communication, whereas the dead, free from the bonds of time, reflect endlessly in song.” After both Dieter and Molly worked on Comala with Ricardo, they began to explore further the name Damiana, discovering that the name aptly describes both musicians. Duo Damiana is focused on broadening the cutting-edge body of repertoire for flute and guitar. Composers featured include Chen Yi, David Lang, Hebert Vazquez, Ricardo Zohn-Muldoon, Jean-Michel Damase, Michael Fiday, and Toru Takemitsu. Future plans include commissions and performances of works by Jesse Jones, Luca Cori, and Shafer Mahoney. In summer 2014, Duo Damiana mentored 97 young composers and numerous performers at the Oregon Bach Festival Composers Symposium, and performed at the National Flute Association Convention in Chicago, IL. The 2014-15 season includes tours through KY, OH, TN, IN, and IL. Past tours have taken Duo Damiana throughout the Midwest and the Pacific Northwest regions of the United States.

Described as "ferociously talented" (The Oregonian), Grammy-Award winning flutist Molly Alicia Barth '97 specializes in the music of today. In demand as a soloist, Molly has recently performed in Australia, Korea, and Mexico and has played solo recitals and led clinics at esteemed institutions including the Indiana University Jacobs School of Music, Oberlin Conservatory, Cincinnati Conservatory, San Francisco Conservatory, and Northwestern University Bienen School of Music. Molly is the Associate Professor of Flute at the University of Oregon School of Music and Dance.