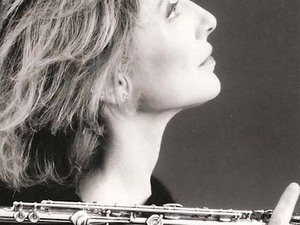 Sponsored by the Oberlin Flute Association.

“Her name is inscribed in the history of her instrument” —Fanfare

Paula Robison was recognized early as one of the great solo flutists of her generation, and is celebrating a career of over fifty years with her performances this season. She was born in Tennessee to a family of actors, writers, dancers, and musicians, and studied at the Juilliard School with Julius Baker and at the Marlboro Music Festival with Marcel Moyse (making her a direct musical descendant of the great Paul Taffanel). When she was twenty, Leonard Bernstein invited her to solo with the New York Philharmonic. When she gave her New York recital debut under the auspices of Young Concert Artists, the New York Times wrote: “Music bursts from her as naturally as leaves from trees”. Soon after that she became the first American to win First Prize in Flute at the Geneva Competition, and her international career was launched. Ms Robison was a founding member of the Chamber Music Society of Lincoln Center and held the title of Artist Member for twenty seasons. During the same time she gave a sold-out annual three-recital series at Alice Tully Hall in New York, and served as co-director with Scott Nickrenz for the Chamber Music Concerts at the Spoleto Festivals, presenting many great artists early in their careers and earning her the Adelaide Ristori Prize and the Premio Pegaso for her contributions to Italian cultural life, and honorary citizenship for life of the City of Charleston, SC. A passionate advocate for new music, Paula Robison has commissioned works by Leon Kirchner (she premiered its newly-restored version in 2014 with Hugh Wolff and the NEC Philharmonia), Toru Takemitsu, Robert Beaser, Kenneth Frazelle, Oliver Knussen, and Lowell Liebermann, and premiered music by Pierre Boulez, Elliott Carter, William Schuman, Michael Tilson Thomas, and Carla Bley, among many others.  “With Art”, an ongoing series with visual artists, has included Sol LeWitt and Mozart in a special installation at the Isabella Stewart Gardner Museum in Boston, Luciano Berio with art from the 1950s at PS 1 in New York, Jim Schantz in Jerusalem, twenty years of Vivaldi performances in the magnificent Temple of Dendur of the Metropolitan Museum of Art, Toru Takemitsu’s mysteries in the Isamu Noguchi Garden Museum, and a battle with Tim Hawkinson’s UberOrgan at MASS MoCA. In March of 2015, Ms Robison and pianist/celestist Bruce Brubaker performed Morton Feldman’s epic 3.5 hour work “For Christian Wolff” on four successive Monday afternoons in Calderwood Hall, Boston. Listeners were free to come and go quietly, but most stayed to experience the entire life-changing masterpiece. Brazilian music has been central to Ms Robison’s playing life, and she has had the delight of performing, touring, and recording with guitarist Romero Lubambo and percussionist Cyro Baptista as the RLB Trio. She also had the honor of making music with the legendary Altamiro Carrilho and his ensemble in Rio de Janeiro.Paula Robison’s historic recordings for Vanguard Classics were recently reissued, including “The Art of Paula Robison”, a collection of Vanguard favorites. Ms. Robison has also recorded for Sony, Mode (the complete Berio Sequenzas, awarded the Premio del Disco Amadeus 2008, and Lei Liang’s “In Praise of Shadows”), New World Records, King Records, MHS, and Bridge Recordings (her Marlboro Festival performance of Schubert’s Introduction and Variations with Rudolf Serkin, named American Record Guide’s Best Recording of the Year). In 2006 she founded Pergola Recordings, an independent label. Recently released: “Paula Live”, an album of live performances with pianists Jean-Yves Thibaudet, Timothy Hester, and Yefim Bronfman, and “Playing New York” with pianist Steven Beck. Coming up is “Caprice”: an album of French music featuring a Thierry Lancino world premiere and Pierre Boulez’s “Sonatine”, with Finnish pianist Paavali Jumppanen. Her recording of Robert Beaser’s “Mountain Songs” with Eliot Fisk has become a classic of the flute and guitar repertoire. Paula Robison’s teaching has taken her all over the world. Her books on the art of flute playing are published by Universal Edition, Schott, European-American Music, Theodore Presser, and G. Schirmer. Ms Robison was awarded a DMA honoris causa from San Francisco Conservatory of Music, and now holds the Donna Hieken Flute Chair at New England Conservatory. Each summer she joyfully returns to The Interlochen Flute Institute and to the Centre d’Arts Orford to give masterclasses and workshops. Paula Robison is grateful for her husband Scott Nickrenz, Amy Abrams Curator of Music at the Isabella Stewart Gardner Museum, for their daughter Elizabeth Fein, Ph.D University of Chicago, now assistant professor in the Department of Psychology, Duquesne University, for her loving extended family, for her supporters and listeners who said early on to a female flute soloist “Yes, you can”, for her inspiring fellow players and teachers, and for her students through all these many years and now continuing to the future, all of whom have found and are now finding ways to make our world a better and more beautiful place with their music.