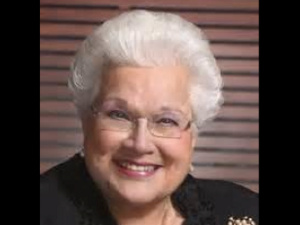 This master class is presented by Oberlin Conservatory of Music in association with the Marilyn Horne Foundation.

A singer whose voice has been compared to Vladimir Horowitz's piano and Jascha Heifetz's violin, Marilyn Horne has been called "the greatest singer in the world" by Opera News and has been recognized by the New York Times as being "the most American of all operatic singers." Horne is known for her dramatic range, singing everything from Gioachino Rossini to William Bolcom, "Danny Boy" to George Handel's Rinaldo. She is credited in Italy as being the interpreter of Gioachino Rossini and is recognized worldwide for her bel canto and versatile style of singing.

She has a made a career of nourishing and popularizing new American music, whether it be contemporary or opera. Marilyn Horne, born January 16, 1934 in Bradford, Pennsylvania, began her singing career at the age of two singing songs around the piano bench.

At the age of four, Marilyn Horne sang at an FDR rally. Her parents moved to Los Angeles when she was 11; she took vocal studies at the University of Southern California and participated in Lotte Lehmann's vocal classes. Her first public performance was in 1954, when she was the dubbed voice of Dorothy Dandridge in the film Carmen Jones. She made her Los Angeles debut the same year when she performed in The Bartered Bride as Hata. Her singing ability was recognized by Igor Stravinsky, and her operatic career began when he invited her to perform in the 1956 Vienna festival. She remained in Europe for three seasons singing for the Gelsenkirchen Opera.

In 1964, she returned to the United States to perform in the San Francisco Opera, landing the role of Marie in Berg's Wozzeck. Marilyn Horne's most notable association was with the Australian opera singer Dame Joan Sutherland, first working with Sutherland in 1961 at Carnegie Hall. In 1965, they were paired again in an unforgettable performance in Boston of Rossini's Semiramide. Her partnership with Dame Sutherland led to her Metropolitan Opera debut in 1970. Horne has performed for various presidents, including at the inauguration of President Bill Clinton.

Admission is $5 per person; free for Artist Recital Series subscribers and OCID.

Tickets can be obtained through Oberlin College Central Ticket Service (CTS) at 440-775-8169 or 800-371-0178. Or purchase online at https://oberlinconservatory.secure.force.com/ticket