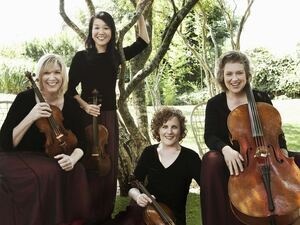 A chamber music guest master class by the Cavani String Quartet. Part of Oberlin's String Quartet Intensive and Festival: A Celebration of of Chamber Music at Oberlin.

An irresistible presence on stage , The Cavani Quartet has dedicated its almost 30 years of artistic life to performing and sharing some of the most powerful music ever written with audiences of all ages and all walks of life. A recent accolade from the Cleveland Plain Dealer described their performing as  “powerful and poetic,  an example of the special joy musicians exude when minds and instruments connect at the highest level.”

The only ensemble to be selected twice, in both 2005 and 2011, The Cavani String Quartet is the recipient of the Guarneri String Quartet Award for Artistic Excellence, from Chamber Music America. Appearances include Carnegie Hall and Alice Tully Hall in New York, the Corcoran Gallery of Art and Kennedy Center in Washington D.C., the Ambassador Series in Los Angeles, Muziekcentrum De Ijsbreker in Amsterdam, Festival de L'Epau in France, and the Honolulu Chamber Music Society. The Cavani Quartet has the honor of being a winner of  the prestigious Naumburg Chamber Music Award as well as numerous competitions including,  Fischoff , Banff and Coleman. Active proponents of contemporary music, the Quartet has commissioned and performed a worldwide array of living composers and is a recipient of the CMA/ASCAP Award for Adventurous Programming. The Quartet has been featured on National Public Radio's Performance Today and St. Paul Sunday, NBC, CBS, ABC, and PBS television. Cavani Quartet recordings of Bartók, Dvořák, Schumann, Brahms, Erb, Chausson, Brouwer and Primosch are available on the Azica, Gasparo, New World, Albany, and Pantheon labels. Collaborations with distinguished artists include Denyce Graves, Stephanie Blythe, Nathan Gunn, Alisa Weilerstein, Itzhak Perlman, and members of the Juilliard, Emerson, Takacs, Ying, St. Lawrence and Cleveland Quartets.

The Cavani Quartet has established itself as a dynamic leader in the field of Arts in Education, and has received no less than nine Chamber Music America Residency Partnership Grants. Nationally acclaimed for their inspiring and innovative teaching and proactive approach to residencies, the Quartet has developed creative programs for audiences of all ages, including a series of children’s concerts for the Chamber Music of Lincoln Center. The Cavani Quartet has also collaborated with artists across disciplines to create programs that unite poetry, well as painting, theatre and dance with the string quartet medium, including the award-winning M.A.P. (Music, Art and Poetry) Program.  As result of their extensive experience in chamber music education, the Cavani Quartet was invited to participate as a leadership ensemble in the first national Chamber Music Educator/Ensemble Seminar sponsored by Chamber Music America. Formed in 1984, the Cavani Quartet was appointed Quartet-in-Residence at the Cleveland Institute of Music in 1988. Music festival appearances and residencies include The Aspen Music Festival, The New World Symphony, Norfolk Chamber Music Festival, Kniesel Hall Chamber Music Festival, Phoenix Phest , Ann Arbor, and The Perlman Music Program. At the Cleveland Institute of Music the Cavani Quartet has developed The Intensive Quartet Seminar, the Apprentice Quartet Program, and The Art of Engagement for student ensembles devoted to the serious study of chamber music.

The Quartet has served as Visiting Artists- in -Residence at many universities including include The University of Texas, Austin, The University of Southern Illinois ,Carbondale, and The University of California , Riverside. The Quartet has been on the Advisory Board of Amateur Chamber Music Players and currently serves on the Honorary Board of the Suzuki Association of the Americas. In  2009, the Cavani Quartet was awarded a Cuyahoga Arts and Culture Project Support Grant for their innovative Beethoven & Brotherhood Project- performing the complete quartets of Ludwig van Beethoven in sixteen neighborhood libraries throughout Cleveland.  In 2010 the Quartet began their acclaimed series featuring the complete quartets of Bela Bartok, in a lecture-demonstration format, illuminating Bartok’s work as an ethnomusicologist and humanitarian. In 2012-13 and  2013-14 , The Quartet will serve as Master Quartet in Residence for the Chamber Music Society of Detroit.