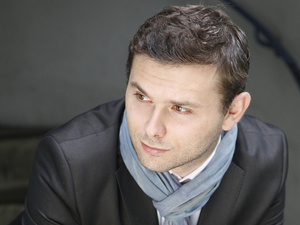 Pianist Misha Namirovsky has been called a “Master of his Art” (The Norderstedter Zeitung – Hamburg) and his playing characterized as “incredibly musical and sensitive, yet at the same time transparent and precise” (Klassik.TV). A recent winner of the prestigious German Piano Award in Frankfurt, and a recipient of the Promusicis Award in Paris, Namirovsky always strives to deeply understand the character of the music and vividly transmit it to the audience. Following a performance of the Chopin Concerto No. 1 with the Springfield Orchestra in Massachusetts, Mark Baszak wrote in the Union News, “Misha Namirovsky astounded the audience with his flawless technique and mesmerizing yet non- theatrical performance.”

Namirovsky has performed as soloist in the United States, Italy, Russia, Spain, Croatia, Germany, and Japan. He collaborated, among others, with the Cincinnati Symphony Orchestra, Sendai Philharmonic Orchestra in Japan, Novaya Rossiya Symphony and the Capella Symphony Orchestra in Russia, and the Niederbayernphilharmonie in Germany. Namirovsky is also a passionate chamber musician, stemming from the time he was a participant at the Marlboro festival in Vermont. He has performed with prominent musicians including Peter Wiley, Arnold Steinhardt, Michael Tree, Sarah Beaty, Deborah Pae, Amir Eldan, Tessa Lark, and Hye-Jin Kim. Recent and future engagements include concerts at Jordan Hall in Boston, at the Weill Recital Hall in New York, recitals in Paris, Germany, Israel, and China, and collaboration with the Atlantic Symphony Orchestra in Boston. His first CD is due to be released this summer.

Namirovsky has received a deep and versatile education, spanning four countries and three continents. He began his studies in his native city of Moscow, and continued his musical development in Israel, Germany, and the USA. Throughout his growth as a musician, Namirovsky was accompanied and guided by renowned pedagogues including Solomon Mikowsky, Eliso Verssaladze, and Hung-Kuan Chen. Further important influences include Mitsuko Uchida, Alfred Brendel, and Peter Weiley. Namirovsky holds degrees from the Manhattan School of Music and the Yale University. He is currently completing his D.M.A at the New England Conservatory in Boston.

Known for his “rich tone and lyrical acumen” (Chicago Tribune), Michael Strauss has performed around the world in chamber music and symphonic settings. Since his debut with the Minnesota Orchestra in 1990, he has appeared as soloist with orchestras across the United States. For the last 18 years, he served as the Indianapolis Symphony Orchestra principal violist where he was featured as a soloist or collaborator in duo roles nearly every season.

Strauss’s recordings can be found on the labels of I Virtuosi (debut of Jennifer Higdon’s Viola Sonata with pianist Hugh Sung), CRI (David Finko’s Viola Concerto and 20th century chamber music works with the Philadelphia-based Orchestra 2001), Lyrinx (Mozart’s complete viola quintets with the Fine Arts Quartet), and Centaur (Stamitz’s works for solo viola with orchestra). He is also the featured recording artist on the Suzuki® Viola School Volume 8, and will record Volume 9 in 2013.

A sought-out teacher, Strauss has now joined the faculty at the Oberlin Conservatory of Music. He is also teaching at the Chicago College of Performing Arts at Roosevelt University for the 2011-2013 academic years. Strauss teaches privately, presents master classes, and coaches advanced students and professionals in orchestral audition preparation. He previously held faculty positions at the University of the Arts in Philadelphia, Swarthmore College, DePauw University, University of Wisconsin-Milwaukee, Butler University and Indiana University Jacobs School of Music.

Strauss’s work has been honored with the National Foundation for Advancement in the Arts Cinnamon Award, First Prize of the WAMSO Competition of the Minnesota Orchestra, Ealing prize at the Tertis International Viola Competition, Artist Fellowship Awards from South Carolina and Indiana, and a Creative Renewal Fellowship Award from the Arts Council of Indianapolis.

A native of Iowa, Strauss began his viola studies in Iowa City’s public schools. He continued under the tutelage of William Preucil, Sr. John Graham and Karen Tuttle. He received additional training at Mannes College of Music and the Banff Centre for the Arts. Strauss is a graduate of the Curtis Institute of Music and performs on a viola made by Matteo Albani from Bolzano, Italy in 1704.

Eldan has performed at the music festivals of Aspen, La Jolla, Ravinia, Giverny (France), Prussia Cove (England), and in West Cork (Ireland). He also participated in the Marlboro Music Festival and toured with Musicians from Marlboro. Eldan has collaborated with members of the Guarneri, Juilliard, and Cleveland string quartets, Richard Goode, Kim Kashkashian, Joseph Silverstein, Midori, and Lynn Harrell. His performances have been featured on PBS and public radio, in concerts throughout the U.S., Europe, and Israel, and he has presented master classes in the U.S., Israel, and China.