From Tigers to Owls: Endangered Species Conservation in the Russian Far East 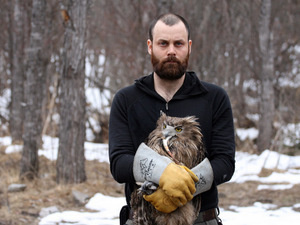 Jonathan C. Slaght will present the talk, "From Tigers to Owls: Endangered Species Conservation in the Russian Far East." He is the Russia and Northeast Asia Coordinator for the Wildlife Conservation Society (WCS).

Abstract: The southern fringe of the Russian Far East is a poorly-known region, and one of the most biologically-rich temperate forest zones in the world. Here, northern species such as brown bears and Eurasian lynx overlap with subtropical species such as Amur tigers and Asiatic black bears.

Slaght has spent more than 20 years working on conservation issues in the Russian Far East. He will provide an overview of the landscape and the species found within, and detail several on-going conservation projects to protect the region’s iconic wildlife, including endangered Amur tigers and Blakiston’s fish owls.

Slaght received MS and PhD degrees from the University of Minnesota. At present he manages research projects involving endangered species such as Blakiston’s fish owls and Amur tigers, and seeks to unify WCS conservation objectives in northeast Asia ranging from Manchuria to the Bering Strait.

Slaght’s writings, scientific research, and photographs have been featured by the BBC World Service, the New York Times, Smithsonian Magazine, The New Yorker, and Audubon Magazine, among others. He is the translator of Vladimir Arsenyev’s 1921 natural history classic, Across the Ussuri Kray (Indiana University Press, 2016), and is under contract with Farrar, Straus, and Giroux to write a memoir about his experiences tracking Blakiston’s fish owl in Russia. He also authors a blog for Scientific American about his fieldwork titled “East of Siberia.”