"From Deep" Screening with Brett Kashmere 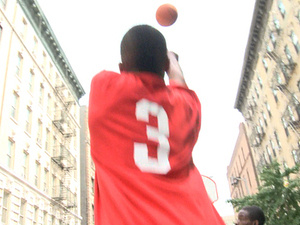 Please join the Art Department and filmaker Brett Kashmere for a screening of his film From Deep.

From Deep "looks at basketball and its profound role in American life – as an everyday street game played by millions around the country; a force in fashion, music, and mass media; and a platform for broader issues of race and class. Drawing his imagery from neighborhood pickup games, contemporary films, music videos, and spectacular sports footage, Kashmere charts a history of the game over the last century, including its rapid cultural rise in the 1980s, with the global branding of Michael Jordan; basketball's growing connection with hip-hop culture; and its multiplying fan base, which laid the groundwork for the sport's significance today." (Amy Beste, Conversations at the Edge)

Support for this event is provided by the Ellen Johnson Fund.

free to the public