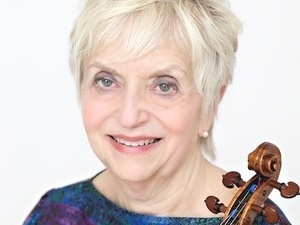 Sonatas for Violin and Piano by Beethoven

Marilyn McDonald, a founding member of the Smithson Quartet and the Castle Trio, currently plays in the Axelrod Quartet in residence at the Smithsonian Institution and so named in honor of the donor of the decorated Stradivarius instruments on which the quartet performs.

She has toured worldwide as a chamber musician in repertoire ranging from baroque to contemporary, appearing at Alice Tully Hall, the Metropolitan Museum, the Frick Gallery, the Caramoor, Utrecht and Mostly Mozart Festivals, Wigmore Hall, Disney Hall, Ravinia and the Concertgebouw, as well as appearing as soloist with the Milwaukee and Omaha symphonies. Concertmaster positions include Boston Baroque and the Peninsula Music Festival.

McDonald is well known for her interest in performing on historical instruments, and former students in this area occupy positions of importance worldwide.

Recent students occupy positions in the Boston and Houston symphonies, in several active string quartets, and have been international prize winners in the Locatelli, Berkeley Bach, Naumberg, Stulberg, and Fischoff competitions.

She has been artist in residence at Boston University and has held visiting professorships at the Eastman School of Music and at Indiana University. She teaches each summer at the Oberlin Baroque Performance Institute and has been honored with the “Excellence in Teaching” award at Oberlin.

Pianist David Breitman directs the Historical Performance program at Oberlin. He is equally at home with the fortepiano and the modern piano, and enjoys both solo and ensemble playing. Recent seasons have included Beethoven’s Fourth Concerto and Choral Fantasy on both historical and modern pianos, and several performances at the renowned Cobbe Collection of historical instruments outside of London. His collaboration with baritone Sanford Sylvan spans more than thirty years, with several hundred recitals and four CD’s, ranging from Schubert’s Die schöne Müllerin, to the premiere recording of The Glass Hammer, a major song cycle by the Cuban-American composer Jorge Martin. He has recorded the Mozart piano-violin sonatas on historical instruments with Jean-François Rivest for Analekta, and, in a collaboration of a different sort, he is one of seven fortepianists on the 10-CD recording of the complete Beethoven piano sonata cycle on CLAVES.

Breitman’s most recent projects involve more Beethoven: a recording of the violin sonatas with Elizabeth Wallfisch will be complete by the end of 2012; the cello sonatas with Jaap ter Linden are projected for 2013. He now shares his enthusiasm for this repertoire with students in the courses “Performing Beethoven’s violin/cello sonatas,” and is currently working on a book titled “Time-Travel for Pianists: How Today’s Players Can Learn from Yesterday’s Instruments.”